it was March 2016 when along with the Syrian refugees we sheltered in Free Social Center Nosotros
( as also later happened with the refugees from the Squat FSC. Botanical Garden, Petroupoli) we walked via Arachovis str. and proceeded in occupying the abandoned building where the 5th High School used to be in the junction of the streets Prassa and Merlie.
Then after we Appealed to the local residents and the population of Athens after the first self-organized assembly, the positive reaction and solidarity was amazing. These were the days when the instinct of Solidarity in society was at its peak. All the problems were resolved in a split of a second. From all over the district of Attiki people were coming to offer and everything worked along the fine tuning of self-organization.
The new actual Mayor of Athens Kostas Bakogiannis who is energetically cooperating with the right wing government in the planning of suppression under way, gave the order for the eviction of the Squat. The result is the same alike all the images we saw during the previous evictions. Men, women and children being forcefully herded in Misery and Despair Marches, walking towards the concentration and selection of human beings’ camps, to the exclusion of those who have been denied every right and their summary abandonment in the hands of police and the state. At the same time the television channels were projecting images which contradicted the words describing them. Even Goebbels himself would have been alerted and amazed watching the news-brief whispering : “ ok guys! this time you went too far ! “
Lies and Nothing but LIES !
Only the local drug-mafia and the pushers will remain calm and untouched in their business.
Everyday that goes by the target of the whole operation is getting clearer and it is exactly the clean up of Exarchia from the “disturbing” ideas and the multicultural aspect of the neighborhood.
That is the conclusion after we analyse the broader choices of the government and are directly related to the well advertised and infamous “ Gentrification “. The plan to “unify” the Museum site, the construction of the Metro station and even more “juicy” statements about the proposed “Liquidation” of the Exarchia neighborhood tend to abolish the function of social space, the desertification and liquidation of the community and the transformation of the neighborhood into a militarized private center. Adding the avalanche of AirBnB, the modification of the area into a dead urban site is imminent.
During these days of the negative individuation and the dissolution of social bonds, the emergence of the collective and the common is the only perspective for a Live, Vibrant Society.
Free Social Center Nosotros
Themistocleous 66, Exarchia.
ΑΚ Αθήνας 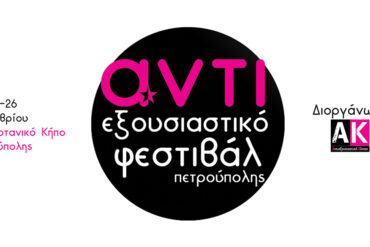